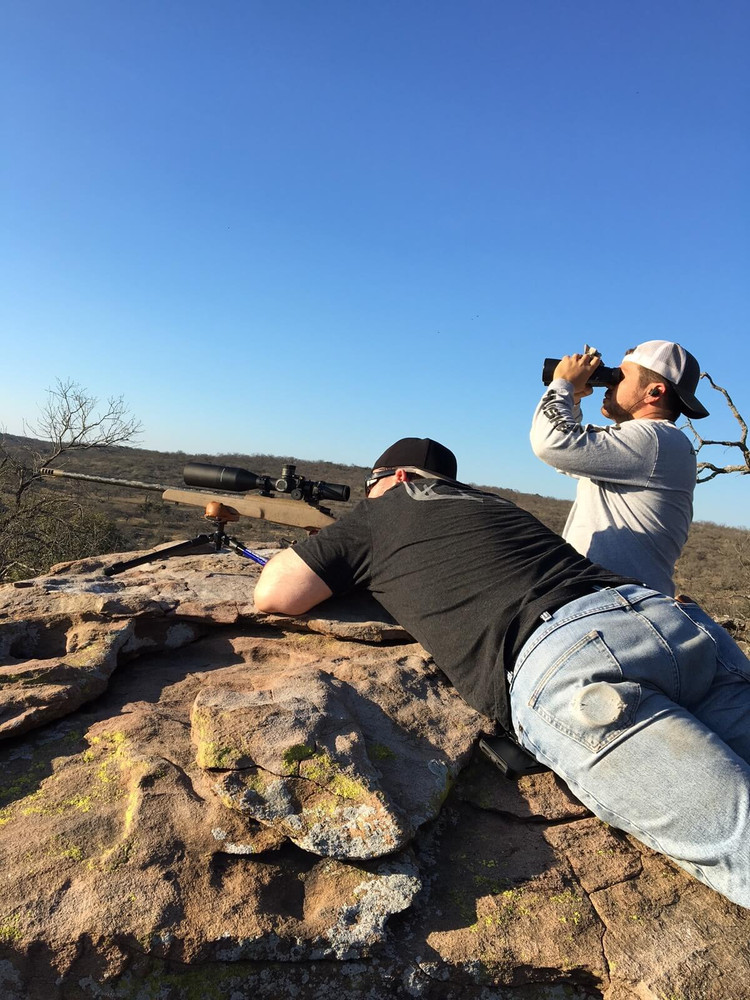 Hexmag is proud to support Morris and his mission to create resources for hunters who are deaf or hard of hearing. Here’s his inspiring story …

When Phillip Morris pursues his prey — whether it’s a hog, deer or some trophy big game animal — complete silence presses in around the Silent Assassin, a nickname that fits the Texas man like a well-worn ball cap, and not just because he’s insanely stealthy. Morris was born profoundly deaf, which prevents him from detecting any sound, like the snap of a twig, the rustle of the underbrush or even the crack of his .308.

Some think Morris is at a disadvantage in the world of hunting, but his lethal nickname proves otherwise. Unlike his fellow hunters who rely on hearing, his other senses kick into high gear. He’s extra careful to be quiet, and Morris can smell an animal long before hunting buddies can detect its approach.

But you can say Morris was a late hunting bloomer. Growing up in a family of non-hunters with deaf members on both side, hunting was never advocated at home, so he pursued football instead, reaching the semi-pro ranks. Finally, a shoulder injury put an end to his gridiron career. Devastated, he turned to golf to try to fill the void, but Morris hungered for real adrenaline. After decades of secretly longing to hunt, Morris decided to pull the trigger on the one sport that seemed to have too many barriers.

Morris quickly discovered a lack of hunting resources in American Sign Language formats. However, immersed in Deaf Culture, he was taught that being deaf isn’t an impairment — just a different way to experience life. Determined more than ever, Morris spent countless hours scouring the web for online forums and hunting videos to study the basics, and after some convincing, he (and his wife’s cousin) talked his wife into his first rifle purchase.

“I built confidence with my equipment first,” Morris recalls during a relay phone interview with Hexmag. And so he trained. A lot. “If you don’t have confidence, you won’t have the ability to know how far your target is and exactly how to reach it.”

After lots of practice, he was finally ready for the real hunt, but with no nearby outfitters trained in American Sign Language, Morris began hunting solo, sharpening his skills through trial and error. After three years of successful hunts, he decided to take up bow hunting in 2011, again proving to be an adept and lethal study.

Then, a year later, he decided to shoot more than just guns and bows, picking up a camera to document footage of his hunts. Together, the two passions blurred into Morris’ Silent Assassin Chronicles, a series of videos devoted to aspiring hunters, both deaf and hearing. Morris even reached out to Razor Dobbs, a high-profile hunter with his own video series, for promotional advice, and under his tutelage, Morris spun his series to the masses. Now, the Silent Assassin videos can be found on YouTube, Roku, Morris’ website (saoutdoors.com) and now television! (ABC’s KVUE Austin channel will soon begin airing his latest series.)

Morris has even spun his videos into a whole promotional website, where he’s an online dealer for loads of hunting gear. There, he touts his sponsors, like Hexmag, and promotes TeamSAOKids, an organization that Morris founded in conjunction with the Texas Park and Wildlife Department to provide outfitted hunting trips to youth who are deaf or hard of hearing. Many of his website’s product sales offset the program’s costs.

Needless to say, Morris isn’t shy to share his hard-earned knowledge. In fact, he’s full of tips. Practice shooting to build confidence. Hunt with the wind. Know your animal’s environment. And of course, make yourself a sponge because the day you stop learning is the day you stop having fun.

“The last 10 years have been one hell of a ride,” Morris says. “All I ever wanted to do was to bridge the gap between the hunting industry and the deaf community. Oftentimes, I find there was a stigma, but I just have to remind myself that I can do everything except hear.”

Watch Phillip Morris YouTube hunting videos here. From hog hunting videos to bow hunting videos, Morris delivers in his deaf vlog series. Also check him out on Roku, follow him on Facebook and bookmark his website at saoutdoors.com.